Presentation of the UNPA Campaign in Barcelona 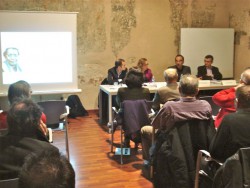 Presentation of the campaign in Barcelona

On March 5 the Campaign for a UN Parliamentary Assembly was officially re-launched in Spain. The campaign and its goals were presented in Pati Llimona in Barcelona where the room was filled with intellectuals, politicians and citizens interested to learn more. The campaign's secretariat in Spain is hosted by the organisation WDGpa (World Democratic Governance project association) which was created one year ago (New association to push for Spain’s support of a UN Parliamentary Assembly).

Fernando Iglesias, President of the World Federalist Movement's Council and a promoter of the UNPA campaign particularly in Latin-America, was the keynote speaker. He was accompanied on the panel by Joan Marc Simon (coordinator of the UNPA Campaign in Spain), Carme Valls (Secretary General of WDGpa) and Salvador Milà (member of the Catalan Parliament and member of WDGpa).

For more information about the UNPA Campaign in Spain please visit:
unpa.apgdm.org