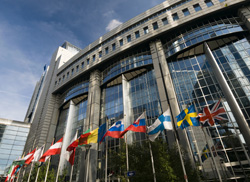 We are delighted to announce the 5th international meeting on a United Nations Parliamentary Assembly which will take place on 16-17 October 2013 in Brussels. The conference is organized in collaboration with the Union of European Federalists and will be hosted in the European Parliament by MEPs Jo Leinen, Graham Watson, and Elmar Brok.

This conference will bring together parliamentarians, campaigners and experts who are at the cutting edge in the efforts for democratizing the global order through the establishment of a parliamentary body.

In two working sessions devoted to the international Campaign for a UN Parliamentary Assembly, campaign supporters will share reports, experiences and views, consider the campaign's policy and strategy, and develop future plans and priorities.

In addition, there will be a public round table discussion on the proposal for a UN Parliamentary Assembly and global democracy, a public reception, and, as a special highlight, a public consultation with Alfred de Zayas, the UN's Independent Expert for the Promotion of an Equitable and Democratic International Order.

Finally, the conference will be a kick-off event for the first "Week of Action for a World Parliament," that is currently in preparation. As part of this week of action, we plan to organize a nice photo event somewhere in the public space in Brussels on Friday, 17 October.

Ours is a world with a growing need for improved and reformed institutions of global governance. As the meeting's hosts Jo Leinen, Graham Watson, and Elmar Brok wrote in their invitation letter that was sent today to the campaign's supporters, "Our goal remains: The establishment of a UN Parliamentary Assembly that allows for democratic participation of the world's citizens in global affairs through elected representatives."

If you wish to attend the 5th international meeting on a UN Parliamentary Assembly, please register as soon as possible by completing this online registration form. More information and future updates are available on this page.

To promote the meeting, we've also created an event page at Facebook.