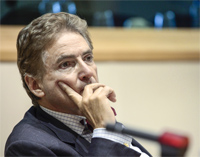 The 5th International Meeting on a United Nations Parliamentary Assembly that was held in the European Parliament in Brussels on 16/17 October 2013 (see our report here) included a special consultation with the UN's Independent Expert on the Promotion of a Democratic and Equitable International Order, Alfred de Zayas. After the meeting, the Independent Expert issued the following press release on 18 October 2013:

Time for a World Parliamentary Assembly

The Independent Expert on the Promotion of a Democratic and Equitable International Order, Alfred de Zayas, welcomes the Brussels Declaration of 17 October 2013, adopted upon the conclusion of a Conference hosted by the European Parliament on the modalities of establishing a United Nations Parliamentary Assembly designed to give greater space to civil society and make global decision-making on matters such as peace, the environment, global-warming, fisheries, and the common heritage of humankind genuinely representative of the views of the world citizenry and not only of governments.

At a panel discussion moderated by Jo Leinen MEP (SPD) the Independent Expert noted that “Participation is a hallmark of democratic governance, entailing a measure of timely consultation so as to legitimize the exercise of governmental power.” He continued: “The right to participation, however, is not a political panacea, a guarantee of social justice or a recipe for peace. While majority rule is an expression of democracy, it may entail a form of populism that disregards the rights of women, indigenous, minorities, migrants, disabled persons, vulnerable groups and others, and therefore results in inequities. Accordingly, the right of participation must be exercised prudently, within the context of the rule of law, and include human rights safeguards.“

Participants at the conference, including several members of the European Parliament, observed that democratization at the international level entails rendering the UN more open and responsive to the needs of the planet’s population by facilitating participation by all stakeholders in decision-making.

Since 2007 the campaign for a UN Parliamentary Assembly has been endorsed by more than 1000 members of parliaments and numerous other stakeholders hailing from over 100 countries. The fundamental purpose of the Assembly will be to give the world’s citizens a voice at the United Nations through more direct representation. Delegates would be accountable to their constituencies and not to their governments.

The Independent Expert concluded that such an Assembly should be inclusive and open for participation of parliamentarians of all UN Member States and observer States, and also provide for the participation of representatives of indigenous peoples, unrepresented peoples and peoples living under occupation. It is generally acknowledged that there is need for reform and democratization of the United Nations and its institutions. “If the United Nations General Assembly is to be revitalized and strengthened, it also needs to be made more democratic and representative. Complementing it with a parliamentary body could be a key to achieve this goal.” Accordingly, in his report to the Human Rights Council (A/HRC/24/38) the Independent Expert recommended that the Council conduct a study on the added value of a United Nations Parliamentary Assembly and on the modalities of establishing such a body.