With the Global Week of Action for a World Parliament that was held for the first time this year from 17-24 October, a new citizens movement has started to emerge that supports the creation of a directly elected global assembly. The week's announcement that was hammered out by an ad-hoc international group of activists noted that despite critical global problems, the world's citizens are left out of global decision-making. "For global matters that affect each and every person on the planet, there exists no elected world parliament," the statement noted. The week of action's slogan was "Let the People Decide - World Parliament Now!"

During the week of action, panel discussions and workshops on the issue of a world parliament were organized in Barcelona, Brussels, Buenos Aires, Forlì in Italy and in London.

Italy stood out as the country with by far the most activities. Here people came together in Bologna, Chioggia, Florence, Genova, La Spezia, Novara, Pescara, Rome, Salsomaggiore, and Verona to hold banners calling for a "World Parliament Now!"

In Palestine, demonstrators marched through the town of El Ma'asara until they were stopped by police forces. Further activities included information stands in Aachen (Germany) or Gothenburg (Sweden). Individual pictures from around the world were posted on Facebook. 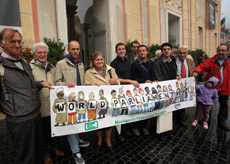 The 5th International Meeting on a UN Parliamentary Assembly in Brussels that was attended by around seventy participants from some 30 countries served as a kick-off event (see our report). It was covered by IPS and EurActiv. In Italy, Spain and Sweden, there was also local press coverage.

Joan Marc Simon, who is a member of the group in Barcelona from where the idea of the week of action originated, said in an interview with us that "the action went very well." He stressed that "it was the first time that something like this has ever been organized on a global scale."

Petter Ölmunger who organized the event in Gothenburg, Sweden, stated that "it felt great to be part of this first ever week of action and to see that around the world, in places like Kampala, São Paulo and Dehli, there are people who, just like me, want to have a world parliament now."

According to Vivian Davidson, organizer of the event in Vancouver, Canada, "we came together to raise awareness for the dire need to find solutions to problems which are now global in scope yet haven't been addressed by today's present nation-state system."

At a conference call on Sunday, it was unanimously agreed to carry out a second Global Week of Action for a World Parliament next year from 17-26 October 2014. "We are once again on planning mode to organize a similar event next year. The time to create a world parliament is long overdue," Vivian Davidson stated.

The week of action is promoted by the international Campaign for a UN Parliamentary Assembly. The campaign's Secretary-General Andreas Bummel said that "the week of action is an excellent way to instigate public discussion on the proposal of a world parliament and to make it clear that there is popular support for this. This will help to create the necessary political will to actually democratize global governance through a citizen-elected assembly. It's only beginning and no doubt it will gain more and more momentum."