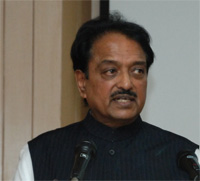 India's Union Minister for Science and Technology and former Chief Minister of Maharashtra Vilasrao Deshmukh (67) passed away at a hospital in Chennai yesterday. As a cabinet member, Shri Deshmukh was one of the foremost supporters of the international Campaign for a United Nations Parliamentary Assembly in India. He was passionate about the cause and had recently organized the release of the Indian edition of the book "Towards A Global Parliament" edited by Richard Falk and Andrew Strauss in New Delhi.

Shri Deshmukh's death is a big loss to the efforts towards a more democratic global order. May his soul rest in peace.