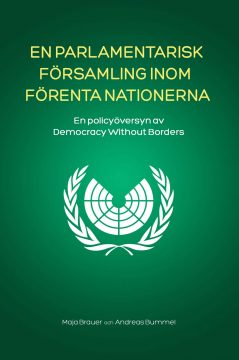 The creation of a UN Parliamentary Assembly as an initial step towards a world parliament is a key goal of Democracy Without Borders. This study examines the proposal and presents official recommendations.

The 75th anniversary of the UN coincides with a dramatic global health crisis caused by the coronavirus pandemic and exacerbated by an incoherent, slow and insufficient global response. This is another symptom of an underlying crisis of global governance. The traditional intergovernmental approach to global challenges is failing. Global warming is an example: action over the last thirty years has been ineffective. Scientists tell us that not much time is left, if any, to prevent a runaway climate crisis.

The root cause of this ineffective governance is a scale mismatch between a political order based on nation-states and issues demanding decisive planetary action. What is needed is a new vision of a democratic world order that is based on shared global sovereignty for global issues. In the current context of nationalist populism, geopolitical tensions, and rising authoritarianism, the goal of a new UN, based on supranational global decision-making with real authority, will not be realized overnight. Nonetheless, whilst it is true that the world is faced with many acute problems requiring immediate action, it would be a big mistake not to pursue long-term systemic change in parallel. Transformation of today’s dysfunctional global system is long overdue. We are convinced that setting up a UN Parliamentary Assembly represents the single most important step towards this.

The proposal of a UN Parliamentary Assembly as described in this study is pragmatic and achievable under current conditions. We envision a modest start that paves the way to incremental development, eventually leading to a transition of the assembly to a directly elected world parliament in connection with an overhaul of the UN and related institutions. The quicker this happens, the better. In the meantime, even in its initial stage, a UNPA has the potential to bring about powerful change.