﻿ On the transition from "Old" to "New Geopolitics"

On the transition from "Old" to "New Geopolitics" 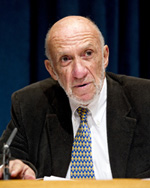 Richard Falk, UN Special Rapporteur on the Situation of Human rights in the Occupied Palestinian Territories, 20 October 2011 at the UN in New York (UN Photo/Eskinder Debebe)

Yesterday, Richard Falk, an international law and international relations scholar who taught at Princeton University for forty years (and who supports the Campaign for a UN Parliamentary Assembly), published a blog post on the transition from "Old Geopolitics" to "New Geopolitics."

"A number of developments on the global stage are suggesting that a New Geopolitics is indeed struggling to be born, although unable at this stage to challenge seriously the reign of the Old Geopolitics," Mr. Falk writes. A "striking example of New Geopolitics" according to Mr. Falk was the realignment that took place in the closing days of the 2009 Copenhagen UN Conference on Climate Change when "the United States sought to circumvent unwieldy and uncongenial procedures involving 193 states by selecting the participants in a hegemonic coalition that consisted of itself, China, India, Brazil, and South Africa."

This move was challenging "that part of the Old Geopolitics associated with the idea of the equality of states as the basis of legitimate multilateral lawmaking in the 21st century."

The civil society vision of the New Geopolitics, writes Mr. Falk, "inclines strongly in the transformative direction of Global Democracy, making all institutions of governance subject to the imperatives of transparency, accountability, stakeholder participation, rule of law, and attention to the human interest/global justice/climate change diplomacy. A first institutional step toward Global Democracy could involve the establishment of a Global Parliament that would directly represent people, not governments."

Richard Falk has been writing on the subject for a long time. Recently, a book was published with collected works of Richard Falk and Andrew Strauss on a global parliament.