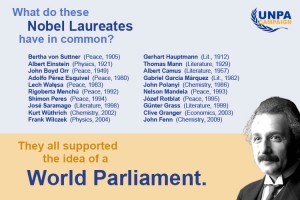 Nobel laureates who supported the idea of a world parliament

Several thousand individuals from over 150 countries have endorsed the Campaign for a UN Parliamentary Assembly. Six laureates of the prestigous Nobel Prize so far formally signed the campaign's appeal, namely John B. Fenn (chemistry, 2002), Clive Granger (economics, 2003), Günter Grass (literature, 1999), John Polanyi (chemistry, 1986), Frank Wilczek (physics, 2004) and Kurt Wüthrich (chemistry, 2002). There are more Nobel laureates, however, who did support the idea of a world parliament.

The one who was most committed to the subject and who quite everybody knows, at least by name, is Albert Einstein (physics, 1921). Einstein's strong advocacy of a world federation and a world parliament was well known at the time (some key texts are collected here). Before Einstein, two further Nobel laureates spoke out in favor of a world parliament: peace activist Bertha von Suttner (peace, 1905) and author Gerhart Hauptmann (literature, 1912).

In 2004, the "World Campaign for In-Depth Reform of the System of International Institutions" published its London Declaration which included a call for "the world’s citizens to be directly represented in the international institutions" and said that "work could move towards creating a parliamentary assembly." Among others, this declaration was endorsed by Nobel laureates Rigoberta Menchú (peace, 1992), Adolfo Pérez Esquivel (peace, 1980), and Joseph Rotblat (peace, 1995). In addition, the campaign was also supported by Nobel laureates José Saramago (literature, 1998) and Gabriel García Márquez (literature, 1982).

When the Committee for a World Parliament was formed in Paris in the mid-1990s, it was immediately supported by Nobel Peace laureates Nelson Mandela (1993) and Shimon Peres (1994). The Peace Nobel Prize laureate of 1983, Lech Walesa, in interviews and speeches has also repeatedly talked about the need for a global parliament.

There are probably more Nobel laureates who do support the proposal than the twenty above that we know of.

We will try to find out!

PS: Here's a nice image that we created.