﻿ New book illustrates how a UN Parliamentary Assembly could be created, boosts campaign 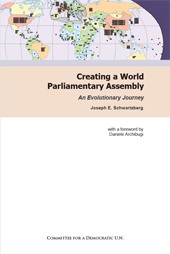