﻿ Cities and their role in global governance, an important debate

Cities and their role in global governance, an important debate 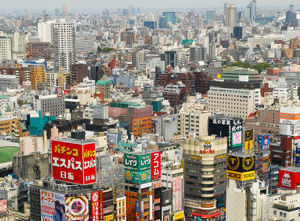 Should cities have a bigger role in global affairs? In the picture: Tokyo, one of the world's largest urban areas (Flickr, theolaphoto)

For the first time in history, more than half of the world's citizens now live in urban areas, a lot of them in one of the mega cities, and their number will continue to grow. At a global mayor's forum convened in April last year by the city of Geneva, the tone was set for a debate that is likely to gain importance. According to a report, "throughout the conference, participants identified an underlying paradox. While the world’s population, economic activity, and political power were all concentrated in cities, these entities were only afforded a limited voice in international decision-making."

Two months later, the well-known US-American political theorist Benjamin Barber gave a talk in San Francisco on this subject and made a case for giving cities a bigger say in matters of global governance. By contrast to national governments that are strongly influenced by party politics and vested interests, the argument goes, "mayors get things done." Cities, says Barber, are inherently pragmatic rather than ideological:

“They collect garbage and collect art rather than collecting votes or collecting allies. They put up buildings and run buses rather than putting up flags and running political parties. They secure the flow of water rather than the flow of arms. They foster education and culture in place of national defense and patriotism. They promote collaboration, not exceptionalism.”

In a conversation with The Atlantic, Barber suggested the establishment of a "global parliament of cities" that would bring together major city governments in order to establish voluntary common policies and common actions on matters of global concern. In many ways, he says, cities are already having an important impact but the process of global collaboration between them should be better formalized.

Indeed, there are already many networks of local authorities in place. ICLEI - Local Governments for Sustainability, for example, supports cities "to become sustainable, resilient, resource-efficient, biodiverse, low-carbon; to build a smart infrastructure; and to develop an inclusive, green urban economy." In 1992, governments agreed at the UN's conference on environment and development in Rio, that public participation in decision-making is important and defined nine "major groups" that should be engaged. Local authorities are one of these groups (while parliamentarians, interestingly, are not).

In this light, it is possible to conceive of a UN Parliamentary Assembly as the institutional core of a permanent multi-level, multi-stakeholder "Cosmopolitan Congress." Although I believe that, in any case, the popularly elected members of the assembly would have to be the main group, in terms of numbers as well as in terms of formal decision-making power, there could be other stakeholders such as representatives of cities at the table as well. This may be one of the features that distinguishes a UNPA from a mere extrapolation of how national parliaments work.

Of course, how exactly this could function requires a lot of more thought and research. Nonetheless, the debate on a stronger role for cities in global governance is gaining traction and the proposal for a UN Parliamentary Assembly could be a relevant part of it.