This year's Human Development Report 2013 titled "Rise of the South: Human Progress in a Diverse World" that was presented to the public yesterday includes a feature article contributed by the Member of the European Parliament from Germany, Jo Leinen, who is also Co-Chair of the Campaign for a United Nations Parliamentary Assembly. As flagship publication of the United Nations Development Program, the report is highly respected and receives strong international attention. 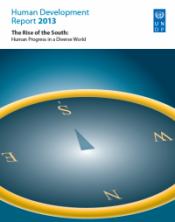 "At a time when intergovernmental decision-making has shown its limits, the quest for equity and sustainability and the urgency of addressing defining challenges for our planet require the engagement of the global citizenship, " Mr Leinen argues in the article published on page 112 (PDF here).

He explains that a world parliament would "complement the United Nations General Assembly" and would be "composed of delegates from national parliaments, representing multiple political parties from each country." Countering one of the standard arguments that refers to the existence of countries with doubtable democratic character, Mr Leinen goes on to note that "since the great majority of national parliaments are democratically elected, such a body would have a high level of representativeness and political accountability." Furthermore, Mr Leinen points out that

The deliberations would possess a high moral and political authority, although the final decisionmaking power would remain with national governments. The composition of each national delegation could be determined either by national parliaments or through special elections allowing citizens to choose representatives for the world parliament. Delegation size would be proportional to a country’s population, an approach considerably different from international bodies where voting quotas are based on monetary contributions.

It is not the first time that the UNDP's Human Development Report elaborated on the subject. In 1999 already, for example, the report argued that:

With the new challenges of globalization, and the need to ensure stronger action on old problems and new, the time has come to rethink the global architecture. Some of the key elements of an improved international architecture: ...  A broader United Nations, including a two-chamber General Assembly to allow for civil society representation.
« Article précédent
Article suivant »
Tags: United Nations
FB TW RSS
FB TW RSS