﻿ UN Parliamentary Assembly discussed at meeting in the Swedish Riksdagen 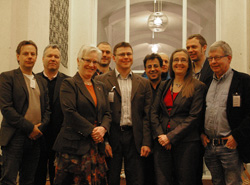