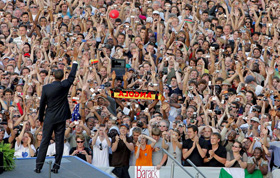 A group of young international students and workers living in Berlin are organizing a federalist action on the occasion of U.S. President Barack Obama's speech in Berlin which he will deliver at the Brandenburger Tor tomorrow, on June 19th, fifty years after the famous speech of John F. Kennedy ("Ich bin ein Berliner").

As Michele Fiorillo, one of the organizers, writes on the event's Facebook page it's

A 'last minute' social (network) campaign to let the "people of the World" know and let the european and global public opinion debate the "Manifesto for a Global Democracy" that calls for a new governance of Earth, starting with the reform of the United Nations and the establishment of a World Parliamentary Assembly...

In essence, the group will try to hold up a banner and say to US President Obama and to the people gathering at Brandenburger Tor: "No globalization without representation."

On the Facebook page they explain that they call on Obama to take the leadership, together with all others of good will, "to change the governance of the United Nations," and to "start a road-map towards the project of a World Federation." As Obama said in his first speech in Berlin on July, 24th 2008, when he presented himself as "fellow citizen of the world": "People of the world, look at Berlin!"

If you're not in Berlin, you can still help the campaign as a "citizen of the world" by sharing the Facebook event with your friends or by sending them the link to the Global Democracy Manifesto.

Realtime updates are available on the Facebook event page.