﻿ Global Parties, Their Role in Politics, and the Relevance of a World Parliament

Global Parties, Their Role in Politics, and the Relevance of a World Parliament

The political and social contrasts in modern societies are transverse to territorial borders. Still, joint transnational interests of societal and political groups are hardly relevant in international institutions. Global political parties that reflect such interests have no influence in global politics. The key institution that would give them real leverage is a global parliament. To be taken seriously, global political parties need to work towards the establishment of a global parliament and aspire to stand for global elections one day.

The foundation of the Progressive Alliance (PA) last May was, among other things, a consequence of growing dissatisfaction with the achievements of the Socialist International (SI, founded in 1889 and re-founded in 1951). During the last two years, the German Social Democratic Party (SPD) in particular had repeatedly called for a reform of the transnational party structures in order to make it “politically relevant” on a global level. In fact, it seems that not only the SI, but all global parties are having a hard time trying to make their voices heard. 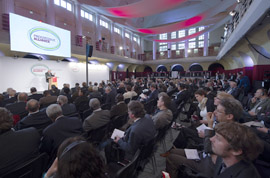 Founding congress of the Progressive Alliance in May 2013. Picture: SPD / Hans-Christian Plambeck

Today we have an entire global party system: Apart from the two social-democrat organizations, there are the Liberal International (LI, 1947), the Centrist Democrat International (CDI, 1961), the International Democrat Union (IDU, 1983), the Global Greens (GG, 2001), the Pirate Parties International (PPI, 2010), and other smaller alliances. All of them have a president and a standing executive body, periodic party congresses and a political program in which they formulate their visions and goals for the world. However, in the public debate on current world issues these parties are practically absent, and even unknown to the vast majority of people. Instead, we are used to the notion that the only key players in global politics are national governments. In recent months, for example, there has been a lot of debate about the the lack of action of the EU and the U.S. in face of the Syrian civil war. However, virtually no media have commented on the fact that until now no single global party has managed to take a stance on this question either. It seems that we are just taking their silence for granted.

A simple yet false explanation seems to be that world politics is all about national interests and that ideological differences, as represented by political parties, are just irrelevant on the supranational level. Indeed, this is one of the basic assumptions of the traditional ‘realist’ school in international relations, but on closer scrutiny it appears more than implausible. The fundamental social divisions that characterizted the political conflicts of the modern age and formed today’s party systems –like the cleavages between urban and rural populations, between religion and secularism, or between capitalists and workers– have never run along national borders, and do so all the less now since our societies become more and more entangled in the course of globalization.

Thus, it is by no means inevitable that national governments alone are the focus of international politics. On the contrary: in all likelihood, we the citizens and our interests would be far better represented there by the various global parties. But what, then, is the crucial difference that makes political parties so successful on the national level and so insignificant on the global stage?

The answer to this question lies in the institutional context: What makes national parties so important to democratic life is their role in national parliaments. In fact, the emergence of the modern parties itself was a consequence of the parliamentarization of politics during the 18th and 19th century. Both in the U.S. and in Europe, the first parties developed out of loose parliamentary factions where like-minded deputies worked together in order to achieve common goals. For the individual deputies, this was a restriction in the freedom to voice their own convictions, but it brought the advantage of more often being part of the voting majority. And since the increasing power of parliaments made stable majorities more important over time, also the political parties gained significance.

Finally, what really made parties a factor of power was the increasing importance of electoral campaigns, where they could offer their members decisive financial and organizational advantages. This need for organizational support made deputies more and more dependent on their parties, which became the central mediators between citizens and politicians. Ultimately, this was of great benefit for democracy: By subjecting their members of parliament to a common line, parties reduced the complexity of the political system and made it easier for voters to express their political will in an election.

Beyond the nation state, however, these mechanisms are largely absent: only in the EU there is a directly elected supranational body that is divided into political groups and has real legislative power; and it is therefore rather unsurprising that the institutional rise of the European Parliament since the 1990s also made the European parties become more important. At the global level, by contrast, key decisions are not taken by parliaments, but by intergovernmental bodies that are composed of representatives of the national executive branches. However, where there is no influential parliament, there is no need to secure stable parliamentary majorities either; and where no lists of candidates are drawn up, parties can’t sanction members who don’t observe their political line.

Thus, politicians who take decisions at the NATO Council, the WTO Conference, or the UN General Assembly have only little incentive to orientate their actions towards a global line. Rather, their loyalty goes to those to whom they are also accountable by institutional mechanisms: the national governments, the national parties which form these governments, and ultimately the national electorates that voted them into office. This is why the standard in world politics usually is the national interest – and not those other transnational social cleavages that are represented by the global parties.

What global parties can do

How can global parties respond to this? One possibility is certainly resignation, leaving the international organizations to national governmentsTo be politically relevant, a global party should aspire to stand for global elections to a global parliament one day. Even if this global parliament remains to be created. and instead focusing only on those areas of global politics that take place outside of formal institutions. The "Basic Document of the Progressive Alliance", for example, vaguely refers to the “establishment of a cooperative world order”, but doesn’t give any concrete indication about what the institutional design of such a world order should look like. Instead, the concrete plans of the PA are limited mostly to activities of the kind we normally associate with think tanks or political foundations: the exchange of best practices, the organization of panel discussions, or (at least) the mutual support of their member parties in national election campaigns.

Now all of these are of course honorable propositions which certainly might bring about some good in the world. Still, somehow it seems as if the PA was lagging behind its potential. If a global party pretends to be “politically relevant”, it should at least maintain the claim that one day it will really play the role of a party at the global level, standing for global elections to a global parliament. Even if this global parliament remains to be created. The Liberals, the Greens, the Pirates and also the SI have already set an example by passing resolutions that call for the establishment of a United Nations Parliamentary Assembly.