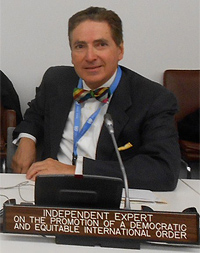 In a report to the Human Rights Council, the UN's Independent Expert for the Promotion of an Equitable and Democratic International Order, Alfred de Zayas from the United States, has elaborated on the question of a World Parliamentary Assembly.

The report which was published online yesterday includes reflections on the nature of democracy, and identifies deficits and obstacles at the domestic and international levels. "In order to test the existence or otherwise of international democracy in recent times," the report says,

one may ask whether States and peoples, including non-represented peoples, have had a democratic opportunity of participating in decisions concerning important issues, such as war and peace, global warming, the environment, trade relations, access to medicine and the common heritage of humankind.

In a part on good practices, the independent expert elaborates on the proposal for a World Parliamentary Assembly (see para. 49) and writes that the idea of the proposal "is to address democracy deficits by giving expression to global public opinion and including citizens in global decision-making through elected officials." After stating, among other things, that UN Charter reform would not be required to establish the assembly, he concludes that

global decisions would have greater legitimacy through citizen input and involvement, if the General Assembly represented people as well as States.

In the section on good practices, the report also refers to several other initiatives that "endeavour to advance a democratic and equitable international order by providing judicial and constitutional review as well as enforcement mechanisms," in particular the Tunisian proposal to establish an International Constitutional Court and the proposals for a World Court of Human Rights and an International Court for the Environment.