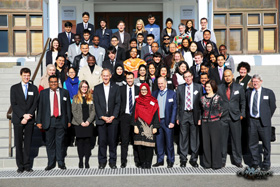 Participants of the Model Global Parliament in Canberra

On 27 July 2013, around 50 students from over 30 countries met in the House of Representatives at Old Parliament House to hold an inaugural Model Global Parliament in Canberra. A report from Nicolás H. Martins and Sandesh Silpakar.

The increasing connectivity among nations from all over the world, the growing convergence of complex worldwide policy issues, and the universal awareness of human dignity are demanding a strengthened global democracy. Although the idea of global parliament dates back centuries ago, the actual need was materialised only after World War II with formation of international organisations like the United Nations, which was an attempt to bring nations together for peaceful future working through cooperation and negotiation. There however is more to be done as such organisations face its own limitations. A Global Parliament therefore is a global body where democratically elected members representing state and non-state actors are able to legislate on global issues on a level playing field.

At the Model Global Parliament in Canberra, several motions under an agenda of education, human rights and environmental issues were debated by students, who represented as elected members of different regions, governments and non-state actors. Negotiations were part of the political debate, while motions were passed valuing democratic principles of ‘one person, one vote, one voice’. The majority ruled the day – even if consensus on an issue was not reached, members were bound to the collective voice of the Parliament.

Building on previous sessions of the Model Global Parliament held in Melbourne, the Canberra session had the opportunity to hear from former parliamentarian, the Hon Bob Brown.The Model Global Parliament might be a sign that a global democratic world is possible if we are willing to make it happen Special guests included Mr Steve Killelea Founder and Chairman of the Institute for Economics and Peace, Associate Professor Chris Hamer, Professor Bruce Chapman, Professor Charles Sampford and Professor Glenn Withers. The Canberra session was proudly supported by the Crawford School of Public Policy at the Australian National University, Ms Pera Wells, currently the Australian representative on the Steering Committee for the Global Interdependence Movement, the Museum of Australian Democracy and the World Citizens Association.

So, what’s next? If a growing consensus is reached in the near future on the need to address global challenges in a more sustainable, cooperative and cohesive basis, the concept of a Global Parliament has an indisputable role to play. The Model Global Parliament – Canberra was a joint vision of the participants from across multidisciplinary studies, such as public policy, environmental sciences, international development policy, economics and international relations. This might be a sign that a global democratic world is possible if we are willing to make it happen. Building on the knowledge capital of modelling global parliament, the next session of the MGP will be held in Sydney.