First international meeting on a UNPA

The first international meeting on a UNPA was held in November 2007 at the Palais des Nations in Geneva under the patronage of former UN Secretary-General Boutros Boutros-Ghali and was hosted by the Society for Threatened Peoples International.

Parliamentarians, representatives of non-governmental organizations and other activists of the UNPA campaign from 18 countries gathered for an exchange on the UNPA concept and the Campaign strategy.

The meeting reiterated the principles laid down in the international appeal for a UNPA such as the gradual approach which allows first steps beneath the threshold of UN Charter reform. It was also stressed, however, that at the same time the eventual goal of a world parliament should be communicated.

While some questions were vividly debated, the meeting also concluded, among other things, that a UNPA should be open for participation of regional parliamentary assemblies and should offer innovative ways for strong NGO participation.

Conclusions regarding policies of the Campaign for a UN Parliamentary Assembly 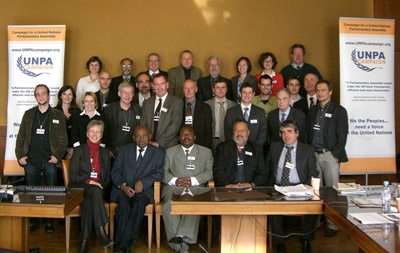