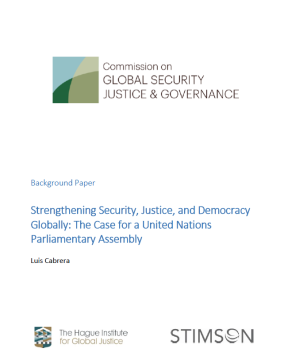 Strengthening Security, Justice, and Democracy Globally: The Case for a UN Parliamentary Assembly

This background paper for the Commission on Global Security, Justice, and Governance looks into the issue of a UN Parliamentary Assembly. While the Inter-Parliamentary Union has increasingly claimed for itself the space of a United
Nations ‘parliamentary dimension,’ questions persist around whether it can fully play important representation and oversight roles at the global level. On balance, it is concluded in this paper, a standing, initially consultative UN parliamentary assembly would be the better option, with the IPU serving as a complementary institution. A key interim step toward developing a standing parliamentary body could be the creation of a Parliamentary Network on the United Nations.