Survey on a UN Parliamentary Assembly 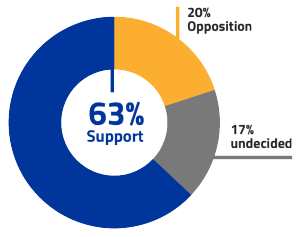 On behalf of the British Broadcasting Corporation BBC, in 2004/05 the research institute GlobeScan conducted representative surveys in 18 countries representing 61% of the world population.

In one of the questions concerning reforms of the United Nations, participants were asked about their opinion on “creating a new UN Parliament, made up of representatives directly elected by citizens, having powers equal to the current UN General Assembly that is controlled by national governments.”

On average, 63% supported the reform proposal, while only 20% rejected it. For the first time, this survey provides empirical evidence that the world’s citizens overwhelmingly support the establishment of a directly elected world parliament.

In every surveyed nation the supporters of a UN Parliament significantly outnumbered the opponents. Overall, support to opposition margins show overwhelming majorities in all nations favoring the creation of a UN Parliament.