Report of the Commission on Global Security, Justice & Governance presented in The Hague

As part of a revitalization of the United Nations, the report of the Commission on Global Security, Justice & Governance that was presented in the Peace Palace in The Hague today recommends the establishment of a "UN Parliamentary Network." According to the report titled "Confronting the Crisis of Global Governance," such a new parliamentary body would constitute a "pragmatic approach toward strengthening UN-citizen relations and overcoming the world body’s democratic deficit."

The document explains that the parliamentary network could be established by the UN General Assembly according to Article 22 of the UN's Charter. "It would bring together parliamentarians elected from their national legislatures, to discuss and advise on issues in UN governance that concern citizens worldwide," the report says. The establishment of this body is understood as "a vital step that can be taken in the immediate term" that is complementary to long-term efforts towards "the creation of a standing, formally constituted UN second chamber." The Commission points out that the parliamentary network would focus "on UN governance itself, and on facilitating more accountable and inclusive decision-making at the global level." 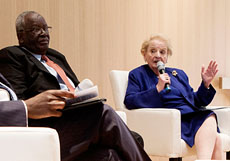 The report and the Commission's key findings were presented by its Co-Chairs, former U.S. Secretary of State Madeleine Albright and former Nigerian Foreign Minister and UN Under-Secretary-General for Political Affairs Ibrahim Gambari. According to Secretary Albright, the world requires "more capable tools of global governance, with different kinds of public, private, and mixed institutions designed for twenty-first-century challenges."

Recommendations highlighted during the presentation include the creation of a ""next-generation UN conflict mediation and peace operations capacity," strengthening the responsibility to "Prevent, Protect, and Rebuild," innovating climate governance, improving G20-UN-Bretton Woods institutional coordination, the expansion of the UN Security Council and a restraint in the use of the veto, or a strengthening of the International Court of Justice.

The international Campaign for a UN Parliamentary Assembly, an informal network of parliamentarians and civil society organizations, applauded the Commission's support for the creation of a UN Parliamentary Network. "Seventy years after the UN's establishment it is high time for a formal UN body that allows elected representatives to be involved in the world organization's affairs," said the campaign's coordinator, Andreas Bummel.

Top image: Launch of the report at the Peace Palace, globalsecurityjusticegovernance.org