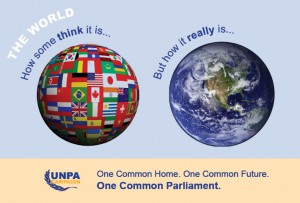 Often it is taken for granted that the world is politically devided among today's nearly 200 nation-states. This new artwork of the Campaign for a UN Parliamentary Assembly (see right, click on the image for a larger size) brings home the message that actually Earth is one indivisibable habitat and that the boundaries created by nation-states are artifical constructs.

Proponents of a world parliament argue that one of its key features would be to transcend national borders. It is expected that the members of a world parliament would group according to their political viewpoint rather than according to their national origin. This would put them into a good position to tackle problems from a broader, transnational perspective. For the first time, a political body would exists that would allow to pursue the common interest of humanity rather than just narrow national interests. The overall idea is captured with the slogan "One Common Home. One Common Future. One Common Parliament."

The artwork is available as a postcard. Supporters can contact the campaign's Secretariat to obtain copies.