I have asked him why a UN Parliamentary Assembly is important, whether there are lessons to be drawn from the European Parliament and how he came to support the idea. Hear and read for yourself! 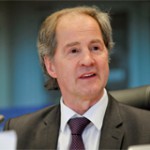 I am talking today to Jo Leinen co-chair of the UNPA Advisory Group and a serving member of the European Parliament affiliated with the progressive alliance of socialists and democrats; welcome to the UNPA audio blog Jo.

We intend to be pretty pithy and to the point on our show/podcast so I'm going to plunge straight into my questions if that is OK?

Great Stuff. OK, the first question is: You are one of the leading parliamentarians in the campaign for a UNPA. When did you first encounter the idea of a global parliament and why did it attract your attention?

It's more than 10 years ago that I thought that global problems need global solutions and the decision-making on the global level should be democratically accountable - so we needed a citizens' chamber, the parliaments, to play a big role on the global level.

OK and I guess the next question dovetails into that. In the face of the immediate challenge of the global climate crisis (that could worsen much quicker than anyone expects), some people do argue that there is no time left to change the system of global governance - that it would be, you know, re-arranging the chairs on the deck of the Titanic. Can you explain why anyone should invest time and energy into something like the establishment of a UN Parliamentary Assembly?

I participated in various climate conferences of the UN and I could see the stalemate of diplomats that are not able to find a good solution and I'm sure that citizen representatives like parliamentarians could give a new dynamic and a new push to this global concern and even saving this global good, the atmosphere, which belongs to all of us - so I think there would be a new element in global politics if parliamentarians come in better than now.

Right and yourself, your involvement in the EU parliament has been fairly extensive, since 1999. So, do you think that the European Parliament is a good model for a global parliamentary assembly that you are considering? What can be learned from the development in the EU if we consider global democracy do you think?

The EU started as a union of states and then they got aware that you need as well a union of citizens; and to represent the citizens you need a chamber and that is the parliament. The EU parliament started as a consultative body with representations from the various national parliaments and very quickly we went towards the direct election of the members of the EU parliament parallel with new competencies of legislation, budget power, and scrutiny of the executive, so I think that this is the first example worldwide of a transnational parliament at the end directly elected by the citizens and this could be a blueprint, a sort of model, how we envisage the UN Parliamentary Assembly to start as an advisory body and then, little by little, to gain power and to control decision making and as well to make decisions with world wide dimension.

So in one sense the EU, as you say, began with more of a national focus but now that focus is shifting towards the citizens to some degree but it's still a sort of hybrid organisation and you think that would work quite well at the global level as well, that model.

So then I guess it's natural that the EU Parliament was the first parliament in the world to endorse the idea of a global parliament or a UN Parliamentary Assembly. What is the current status of that support?

The EU Parliament is used to work on a multilateral level. We have no problem, because of our own practice, to think about a transnational parliament so this chamber was one of the first to endorse the UN Parliamentary Assembly and it is interesting to see that the African Parliament followed us, the Latin American followed us, you have all these regional continental parliaments that see the use of a UN parliamentary body and I think that' s a strong signal to the one or the other national parliament to get on board and to follow and support us.

What do you think would be the most important nation-state parliament whose support you would be most, you know, encouraged by?

I think that the emerging countries are aware of the global problematic and dimension and I see a lot of movement in India. We have 50 parliamentarians from the Indian Parliament, we have support from Brazil and many African countries as I mentioned before. So little by little this campaign is growing and getting really background and support and we have to continue the campaign.

Let's take the worst case scenario, if we don't improve our current - some say dysfunctional - global governance system. What is the downside? I mean is it really that serious? We've been muddling along since the end of WWII, we've got over some crises, we haven't stumbled into a major war like WWI or WWII. So what is the downside of not improving our current system of global governance?

You have a lot of frustration in the world that people are not represented in decision making. You could see that the UN Security Council is a really inadequate system for representing the world with 5 powers having veto on global decisions. I think that the world shows unable to solve common problems and that of course will have a lot of collateral damages; whether it's civil wars or wars, whether it's the further destruction of the eco-systems with all the negative consequences; so we could have a better world by involving citizens and their representatives and not letting them out of the process.

Great! Was there anything else you wanted to say about the UNPA campaign?

That was perfect I think you have a few elements that you need. OK. Greetings to Andreas and good luck.

Thank you very much Jo it was a pleasure chatting to you. Bye now.