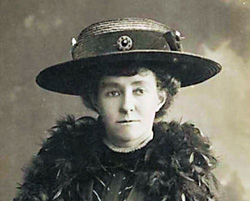 Emily Davison was considered a martyr by her fellow suffragettes

It was 100 years ago that suffragette campaigner Emily Davison ran among the horses at the Epsom Derby in protest that women did not have the right to vote. She fell under the King’s horse and was killed.

In 1928, just 15 years later, women finally acquired equality with men in being able to vote at the age of 21. Emily Davison’s objective was achieved, and no-one could imagine reversing that change now.

In commemoration of what she did, there is discussion in some of the papers (see here, for example) of what Emily Davison would be campaigning for now. Various examples of injustice towards women are put forward as likely campaigning subjects, such as domestic violence or discrimination in the workplace, and important they all are.

But let us look at things differently. Treat Emily Davison’s demand not as equality for women but as for the extension of the franchise. I think that today, 100 years on from that fateful horserace, she would still be demanding the right to vote.

The judgements and demands of the IMF, for example, are a substantial plank in the platform of austerity that is being followed by debtor countries around the world. Who voted for the IMF to adopt this view? There are other policies it could propose instead, but no-one gets to vote for those.

The G8 summit will be held in County Fermanagh later this month, and no doubt various decisions will be taken and communiqués issued from the meeting. But who gets to vote for them? There will be the heads of government around the table, but that’s it. Today’s Emily Davison would be watching and waiting outside the perimeter fence, wondering what was being decided, but with no chance of actually having a say.

And how are we to fight climate change? Everyone knows that no single country can deal with it on its own, but all our votes can do is to politely request that other countries will listen to and follow our lead. That isn’t how democracy works, on the basis of polite requests. No, democracy works when the citizens use their votes to force action by their government. But unless we vote together, we cannot act together.

The most immediate step in the direction of giving everyone a vote would be to create a parliamentary assembly for the United Nations. That way, the big international decisions that affect the lives of everyone on the planet can start to be scrutinised by the representatives of all the citizens, rather than being left in the hands of the governing elite. I like to think that is what Emily Davison would have wanted.