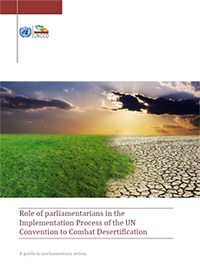 Recently published: The UNCCD's handbook on the role of parliamentarians

The handbook that was authored by former parliamentarian Uwe Holtz from Germany points out that:

A United Nations Parliamentary Assembly (UNPA) could strengthen the effectiveness, transparency, representativeness, plurality and legitimacy of the work of the institutions that compose the United Nations system. The establishment of a UNPA could also be a centrepiece for parliamentary supervision of the renewed system of international financial, economic and environmental governance. The Round Table of the Parliamentarians under the UNCCD could play a leadership role in this context.

Support for a UN Parliamentary Assembly in the context of UNCCD was mandated by the Parliamentary Round Table on UNCCD in a declaration adopted at the ninth session of the conference of the parties of the UNCCD in Buenos Aires in 2009 (see our report here).

Beginning with the second session of the conference of parties of the UNCCD in 1998, the Round Table of Parliamentarians has become an established forum for the exchange of views between parliamentarians working on sustainable development and desertification in particular.

The handbook will be discussed at the next Round Table for Parliamentarians on UNCCD on 20 September in Windhoek (here's the agenda of the meeting).