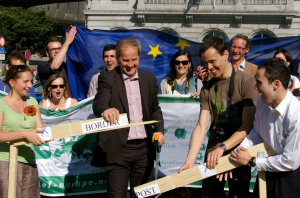 Over 160 young delegates from sections of the Young European Federalists (JEF) coming from all over Europe gathered in Paris on 1-3 November 2013 for the organization's XXII. European Congress.

Seven months ahead of the European elections, JEF adopted a renewed political platform stating the organization's demands for the future of Europe. In a section on "Federalism in Europe and the World," the new political platform includes support for the establishment of a United Nations Parliamentary Assembly:

JEF is a pan-European network of young people established in 1972. The network now includes 31 official member sections and about 30,000 activists in over 35 countries. According to the organization's statutes, the goal of JEF is the creation of a democratic European federation as a crucial ingredient for peace, a guarantee for a more free, just and democratic society and a first step towards a world federation.

The congress in Paris re-elected Pauline Gessant as the organization's president.