﻿ New statements in support of a United Nations Parliamentary Assembly

New statements in support of a United Nations Parliamentary Assembly 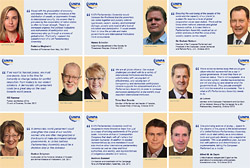 Since October, numerous new statements were made

In the past five months since we last posted an overview of new supportive statements on a UN Parliamentary Assembly, many more have accumulated.

If you follow this blog, you've already seen some of the extraordinary statements made on the occasion of the 5th International Meeting on a UN Parliamentary Assembly that was held in Brussels in October 2013 which we published here in full, namely from the president of the European Parliament, Martin Schulz, the chair of the Foreign Affairs Commission of the European Parliament, Elmar Brok, and the UN's Independent Expert on a Democratic and Equitable International Order, Alfred de Zayas (by the way, here on Youtube you can watch contributions made by Alfred de Zayas, Hanno Schedler, Antonio Vigilante, and Gerald Häfner at a panel during the conference).

Here are now some of the new sound bites. We begin with a statement from Fernando Iglesias, a former member of parliament from Argentina who was co-chair of the UNPA campaign's  parliamentary advisory group and who now serves as council chair of the World Federalist Movement. According to him,

Last year, the Italian member of parliament Federica Mogherini introduced a motion in the Italian parliament in support of a UN Parliamentary Assembly. We asked her to describe briefly why she endorses the proposal. Here's her statement:

The parliamentarian and leader of the Norwegian liberal party Venstre, Trine Skei Grande, described her motiviation to support a UNPA as follows:

The Vice-President of the Parliamentary Assembly of the Council of Europe, Swiss parliamentarian Liliane Maury Pasquier, said that:

In a written message addressed to the participants of the conference in Brussels, the Minister of Textiles in the Union Government of India, Kavuri Sambasiva Rao, explained:

The UN system as it exists today does not reflect the changing dynamics of the new world order. Minority communities and opinions continue to be neglected. It is essential that a United Nations Parliamentary Asembly comes into place which reflects the vast diversity of this globe. This could result in better collaboration between governments and addresses current concerns like war, poverty, terrorism, drug trafficing etc. in a better manner.

Speaking at the conference, the co-founder and secretary-general of the UNPA campaign, Andreas Bummel, emphasized the idea of an inclusive parliamentary assembly that was also part of the final declaration:

The founder of the feminist initiative of Sweden and former member of parliament Gudrun Schyman said that: