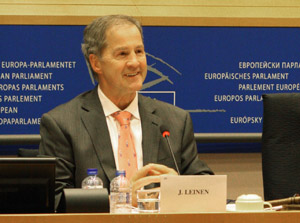 On Tuesday, 18 February, the Parliamentary Forum on “EU Parliaments in global governance”, hosted by the European Parliament's Vice-Presidents Miguel Angel Martínez and Othmar Karas in Brussels, focused on the "role of parliamentarism in an increasingly connected world" and the question whether "current forms of political representation are adequate to address today's international challenges."

The Co-Chair of the Parliamentary Advisory Group of the Campaign for a UN Parliamentary Assembly, European lawmaker Jo Leinen, introduced the campaign and its proposal at the afternoon session of the conference that was devoted to global parliamentary initiatives. Mr Leinen emphasized that it was no longer sufficient that parliamentarians occasionally participate as observers in government delegations to intergovernmental organizations. Instead, he said that elected representatives should be formally recognized and included at the UN through a new parliamentary body.

Other speakers at the conference who voiced support of the proposal of a UN Parliamentary Assembly included the Member of the European Parliament Silvana Koch-Mehrin who represented the Women in Parliaments Global Forum and Jan Wouters, a professor of international law and director of the Leuven Centre for Global Governance Studies.

Speaking at the opening session, Othmar Karas stressed his view that parliamentarians should play a "decisive role" in international organizations.