﻿ Why we need a world parliament

Why we need a world parliament

Today the world is a different place from the days when the United Nations was born. This is why the answer to democratise that hallowed meeting ground of states is the establishment of a UN parliamentary assembly, writes Joan Marc Simon 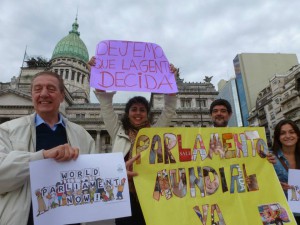 From 17-24 October citizens around the world called for a world parliament, like here in front of the Argentinian parliament in Buenos Aires

Tired of waiting for global leaders to take up their responsibilities a group of people from different countries launched a bold initiative to ask for the creation of a World Parliament. So far this new initative consists in the organisation of events and actions in 46 cities in six continents. From Brussels to Israel/Palestine and from Washington to Delhi, people are calling for the creation of a parliamentary body that represents majorities as well as minorities, ruling parties just as parties in the opposition in order to make the common interest rule over the law-less global system of international relations.

Utopian? Half a century ago the European citizens called for the creation of an European Parliament. Today that visionary dream is a reality and, despite all the drawbacks, we can affirm that Europe would be in a lot worse shape had it not been for this democratic institution. The European Parliament has been very useful in balancing the national interests represented by member states in the Council with the European interest. Similarly, intergovernmental negotiations, be it at the EU level or at a world level, have the problem of being dominated by national interests while the common interest is hardly present. Therefore, the results tend to be good for some countries and for some big corporations, but rarely ever for the common interest precisely because there is no body in the negotiations that defends or represents it.

The European integration is the result of the good combination of the common interest of all citizens as represented by the European Parliament and the European Commission on the one hand and the national interests represented by European Council and Council of Ministers on the other. What could be called global des-integration is the result of a system of international relations where the lack of representation of the common interest and the precariousIt is wrong to think that a World Parliament will solve all the problems because a Parliament is not a solution in itself but an instrument to take more democratic and legitimate decisions rule of law is leading to uncontrolled financial speculation, environmental degradation, human rights violations and civil wars. The United Nations was created to address this defect but six decades later it needs a complete renewal in order to give a voice to the majority of the world's citizens in the international sphere.

Many are skeptical about the idea of a World Parliament because they think that it is likely to be hijacked by corporate power like any other parliament. The fear is a legitimate one; however it is wrong to think that a World Parliament will solve all the problems because a Parliament is not a solution in itself but an instrument to take more democratic and legitimate decisions. The alternative is the current system of world governance where a few governments decide for us all, where laws are not universally binding and where unanimity is needed to take any relevant decision. The alternative to a World Parliament is a system that is not only unfair and undemocratic, it is also a very inefficient way to take decisions. This system will lead to collapse.

Those oposing the idea of a World Parliament should be reminded that whilst they keep on waiting for the perfect solution to organise world relations we still live in a world where all parties in opposition don’t have any voice in international relations, where there are countries like Mauritania where milions of people are still slaves, where there are countries such a Syria with ongoing civil-wars because of non-existing supranational governance... Such is the price of having anarchy in global relations.

Through the Global Week of Action for a World Parliament many citizens of the world are suggesting an instrument which can help to adress all these problems. The message is about the principle: it doesn’t intend to describe how this World Parliament should look like or how it should work, it just wants to focus on the fact that we need a World Parliament, as an idea, to replace the current ineffective and inoperative system of global governance.

The week of action is supported by the international Campaign for the Establishment of a United Nations Parliamentary Assembly which was launched in 2007. A UN Parliamentary Assembly is viewed as the first step to create a parliamentary body to scrutinise and legislate in bodies such as the UN, the IMF, the World Bank, the WTO and any other relevant international institution. At the end of the day the principle is simple; those in charge of the world governance should be controlled by those who are affected by their decisions.

Joan Marc Simon is the Spanish coordinator of the UNPA Campaign and also a board member of the World Federalist Movement. This opinion piece was originally published on 22 October 2013 by EurActiv.com.