The implementation of a UN Parliamentary Assembly 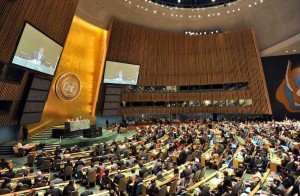 The UN General Assembly could establish a UNPA

A United Nations Parliamentary Assembly (UNPA) can be established without a reform of the UN Charter.

The General Assembly would instigate the preparatory process and finally adopt the UNPA’s Statutes. Limited only by the scope of its own powers, the assembly would be able to vest the UNPA with distinct rights and functions.

Alternatively, the UNPA could be created through a new international treaty. This treaty would consist of the UNPA’s Statutes and would be negotiated by a group of like-minded governments. To enter into force, the treaty would have to be ratified by a certain number of countries as stipulated in the Statutes. Rights and functions vis-à-vis the UN would have to be confirmed by a cooperation agreement adopted by the UN General Assembly. Again, the UNPA’s rights could not exceed those of the General Assembly.

In either case, the UNPA should be open to the participation of all UN member states.

The establishment of a UNPA could be prepared by a United Nations Parliamentary Network set up by individual parliamentarians.

Numerous existing international parliamentary institutions such as the European Parliament or the Pan-African Parliament provide important experience to draw upon.

Various models have been put forward to demonstrate options for the allocation of seats.

For more details, check the publications collected on this website.