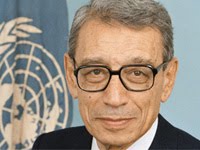 The Campaign's UNPA Audio blog is very proud to present our interview with Dr. Boutros Boutros-Ghali.

Boutros Boutros-Ghali is an Egyptian politician and diplomat who was the sixth Secretary-General of the United Nations from January 1992 to December 1996. An academic and former Foreign Minister of Egypt, Boutros Boutros-Ghali oversaw the UN at a time when it dealt with several world crises, including the breakup of Yugoslavia and the Rwandan Genocide.

In November last year, the former Secretary-General celebrated his 90th birthday. From the very beginning in 2007, he was a strong supporter of the Campaign for a United Nations Parliamentary Assembly. Among other things, he was also President of the Organization of the Francophonie and President of the South Centre, a joint think tank of countries of the Global South. The former Secretary-General gave us a concise and focused insight into his thinking about the future of the UN and what it's priority should be if international peace and democratization is to be secured.

I know you're an immensely busy man so we'll skip the small talk and get straight to the questions!

With hindsight - obviously it's very easy looking back - but with hindsight, with the information we have today and that you have today, is there something you'd have done differently during that period?

I don't know because on a theoretical basis it is very easy to say I would've done it in a different way; we have 15 years, 20 years of experience, so already our situation is better than the situation of somebody who is confronted by a problem for the first time in his life.

In your agenda for democracy you emphasized the connection between national and international democratization. Do think the energy of the Arab Spring could finally help to push forward the democratization of the U.N.?

No, because first of all I disagree with the expression the Arab Spring. Secondly, it is just one part of the world. We have 100 to 200 countries and the Arab countries represent only 5 percent of the family of nations; this is number one. Number two, we are still at the beginning of this evolution. It is very difficult to to give you an opinion. Let us wait at least one or two years before we predict what will be the result. Will it reinforce the process of democratization or, on the contrary, will it prove that the democratization does not work in certain parts of the world? But this does not appear today, it needs time. We agree that if you have a disease it will take you two or three years to find a solution to overcome the problem of your health; for a nation it will take more so give us time and in the next few years it will be more easy to answer to this question.

So you're a longtime supporter of the concept of the U.N. parliamentary assembly. Do you think that this idea resonates in the global south and with the Arab world in particular?

I don't know if it will have any results but certainly that this will help; as long as we contribute to the internationalization of the problems; as long as we are taking consideration of the problem of globalization; that the national problems of tomorrow, or even certain national problems of today, can not be solved on a national basis, it must be solved on an international basis. So here this re-adaptation is essential if we want to achieve peace and if we want to achieve the democratization of international relations.

Do you think we're going to get there? Are we on the right path do you think?

Again, my answer would be we're still at the beginning of a very long road. How many years did it take to recognize the sovereignty of the state? How many years did it take to create an international organization like the League of Nations? If you read the first books which appeared 200, 300 years ago about the importance of creating an international organization - the League of Nations was created only in 1919! So it'll take time.

Secretary-General that's all I had for you. Was anything else that you wanted to specifically address or tell the listeners of our podcast?

Secretary-General, thank you for taking our call it was a pleasure chatting to you!

And I thank you for your interview, thank you.