﻿ Ensuring the accountability and legitimacy of global governance

Ensuring the accountability and legitimacy of global governance

As global interdependence and international cooperation grow stronger, the requirements to achieve public acceptance and trust in global governance increase, argues Elmar Brok, the chairman of the European Parliament's Commission on Foreign Affairs in this piece. A UN Parliamentary Assembly, he writes, would be a means to allow for greater public participation in the UN and to exercise global parliamentary oversight over UN bodies. 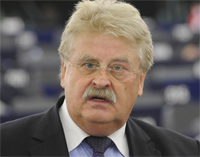 The international system developed after World War II has been based on intergovernmental cooperation, in which executives take the lead and act on behalf of their states. In the post-Cold War era, however, the growth of economic interdependence, the proliferation of transnational actors and other stakeholders, including parliaments, the spread of technology, and increasing numbers of global issues generate a strong need for more and wider international cooperation.

At the same time, parliamentary democracy in general has spread world-wide. In 2003, some 121 electoral democracies have been counted by Freedom House, compared to only 66 in 1987 and 30 in 1975. The acceptance of parliamentarism as a means of legitimizing decisions has grown. Nowadays, complex initiatives for intergovernmental cooperation need stronger-than-ever parliamentary backing in order to achieve public acceptance and trust.

We must insist on behalf of our citizens that international organizations be open to public scrutiny instead of mysterious, secret diplomacy.

We must insist on behalf of our citizens that international organizations be open to public scrutiny instead of mysterious, secret diplomacy. The European Parliament provides an example to the world of how a multi-nation parliament can evolve and function for the benefit of its citizens.

In the process of reforming global governance and making it more accountable and legitimate, we remain committed to the reform of the UN system in order to enhance the Organization's representativity, transparency and effectiveness. Interaction on global issues between governments and parliaments has to be promoted and global governance strengthened. Therefore, I support the establishment of a UN Parliamentary Assembly within the UN system to allow for greater public participation in the activities of the UN, acknowledging that a UNPA would be complementary to existing bodies, including the Inter-Parliamentary Union.

Nevertheless, we also have to carefully listen to the opponents of such an initiative, which raise valid questions regarding, among others, funding, voter turnout, and the fact that many UN member nations are undemocratic and not electoral democracies, which could create legitimacy concerns for a UNPA – and such views are widely echoed in the European Parliament as well.

The author is chairman of the European Parliament's Commission on Foreign Affairs. This article is based on a statement delivered at the opening of the 5th International Meeting on a UN Parliamentary Assembly on 16 October 2013 in Brussels