﻿ Don Davies: In view of global issues, expanding democratic input through a UN Parliamentary Assembly isn't a luxury, but a necessity

Don Davies: In view of global issues, expanding democratic input through a UN Parliamentary Assembly isn't a luxury, but a necessity 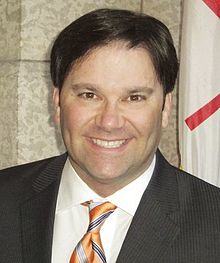 In this latest interview in our series I am talking to Don Davies, a member of parliament for the New Democratic Party in Canada. Don was one of the initial signatories of the international appeal for the establishment of a UN Parliamentary Assembly that was launched in 2007. He is Canada's Official Opposition Critic for International Trade and Vice-Chair of the House of Commons Standing Committee on International Trade. A member of a number of parliamentary groups, he serves on the executives of the Canada-China and Canada-Europe Parliamentary Associations and is a delegate of the Canadian Parliament to the Council of Europe.

We had a great talk about how he got interested in the issue of a UN Parliamentary Assembly, whether there's something to learn from the example of the European Parliament, about the development of democracy and globalization, and how the idea of a global parliament could finally prevail.

Thanks, it's pleasure to be here!

Firstly, special thanks for allowing us to have this call smack in the middle of the holiday season. That really is going above and beyond!

Oh, it's a real privilege.

Looking at your resume, you've clearly had an interest in politics set in a broader context for some time. How did you first learn about, and become interested in, the concept of a United Nations Parliamentary Assembly?

Well, I suppose, beginning as a young university student, when I began to study international politics. I guess it's been a broad continuation since then, of having my mind and my thoughts gradually expand to the conclusion that as we enter an increasingly globalized world there are so many issues that interconnect us and so many issues that require multinational cooperation, it just seems like a logical step to me that we amend and expand our democratic institutions and structures to deal with those interconnected problems.

Absolutely, I have been a Canadian parliament delegate to the Council of Europe for the last three years and so every year I travel to Strasbourg and get to watch some form of that develop at the Council of Europe. We have a pan European approach to different issues and problems and I think, to be honest, that Europe is leading the world in trying to create structures that transcend national interests and start the process of tackling issues and problems on a supranational basis. I think there's a lot to learn from that process and certainly I do every time I go there.

What are the features of a popularly elected world parliament that make its establishment most attractive in your opinion?

Well, to me, the concepts of democratic institutions are fluid and dynamic. If we think back to the beginning of democratic structures two or three hundred years ago, they start on a very local small basis, and gradually there's been a natural expansion of them. So, I believe that we are on a trajectory that is logical, necessary and inevitable to continue to think about our democratic structures and to make them responsive to the people - not only of our local village or our county or province or state - but now of the world.

So, you know, if you look at certain problems: we are already seeing global cooperation on things like international trade and commerce; there is increasing regulatory harmonization; media and communications transcend national borders all the time.

The need for citizen input into global issues has never been greater. That leads inevitably to the need for a United Nations Parliamentary Assembly. We are already seeing so much de-facto co-operation on a global level that I think it's only a matter of time before we see that the democratic structures that can give pure citizen democratic input into those issues are accomplished; the need has never been greater! We have environmental and climate change issues, social problems, endemic poverty and under development that I think the nation state has proved to be incapable of tackling because those are issues that transcend national borders. The bottom line is about democracy, and having citizen engagement in the issues on this planet, and I believe that leads inevitably and inexorably to the need for a United Nations Parliamentary Assembly.

I completely agree with you and yet, even the creation of a consultative UN Parliamentary Assembly is not yet part of the official reform agenda at the United Nations!  National governments are reluctant or cynical to these ideas. How can they be convinced? I agree with you the case is overwhelmingly logical and compelling. Yet people in power are not convinced. What can we do to convince them?

Well, that is an excellent question for which I'm not sure I have a magic answer. I think the creation of democratic structures has always been one of struggle. It has always been one of challenge because the status quo is always difficult to change; there are vested interests always. There is a comfort in doing things the way they were doing them.  It's a process of some difficulty and I do believe that all great social change comes from a small group of people working diligently who have a good idea. You've heard the phrase "you can't keep a good idea down?" My sense is that the concept of some sort of global parliamentary body is growing. It's an expanding idea and I think that there'll be a tipping point, where more and more parliamentarians around the world like myself and you and others working towards this speak about this issue more, I believe it's sparking the beginning of a concept that will ultimately take root. Ultimately though, it will be up to the demands of the people of the world and, to some degree, on the imperative. I mean if you take something like global climate change: I'm not so sure the concept of an effective parliamentary assembly is a luxury, I think it's a necessity! As that becomes more and more known, I believe people around the world will demand a more effective structure to deal with these issues, that again, nations have proved unable to deal with and are incapable of dealing with on their own.

In what ways do you think that the government of Canada and the Canadian parliament might support the idea of a global parliament some day?

Well, I think the Canadian parliament is similar to governing bodies around the world, you know, we have those that are thinking of the future and pushing for more democratic and more responsive global institutions and then you have those that are resistant. There is a real conservative (small C conservative) vs. (small L) liberal tension in the Canadian parliament as I'm sure exists in most parliaments. Presently, Canada has a conservative government and they are similar to the United States where there is an instinctive resistance to what they see as a ceding of sovereignty to a larger body. I personally believe that that is a mistaken view and I think it's also a destructive one. I also think it's an a-historical one because it goes completely against the march of history where we do create democratic structures on an ever increasingly large basis because it's necessary. I think that political thinking lags the technological, commercial, environmental and social reality of the world. We're already global! Our democratic institutions are simply lagging the reality. We do have structures in the Canadian parliament like the Inter-Parliamentary Union where there are structures to discuss these issues. However, I don't believe those structures have been as ambitious as they ought to be in putting issues like global parliamentary government on the agenda but those exist and we should be trying to use those processes more and more.

How can we get the message of a global parliament out? What advice do you have for our listeners?

Just that I think the most powerful ideas in politics are ideals of hope and optimism and of creation and democracy. All of those ideas have their counterparts, but ultimately I believe they prevail, and I think people of goodwill and people who care about people wherever they exist on the planet; and care about our planet itself and care about democracy; need to take heart and keep working towards it. I think the work that we are doing today is paving the way for a some very important, necessary and ultimately inspiring changes that will occur in the future.

Thanks very much, Don, for taking the time to talk to us today.

Brian it's my pleasure! Thank you for your time and for inviting me. All the best in the holiday season!