﻿ Gabriela Michetti: On the split between real and fake economy and the promise of a world parliament

Gabriela Michetti: On the split between real and fake economy and the promise of a world parliament 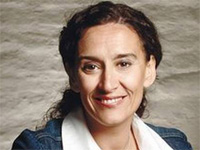 In this interview we are talking to Gabriela Michetti, a member of the Argentine Chamber of Deputies since 2009. Before entering national politics, she was deputy head of the government of Buenos Aires, the second-largest metropolitan area in South America. She has a degree in International Relations and worked as an adviser at the Argentine Ministry of Economy.

Recently, Mrs Michetti took over the position as Co-Chair of the Parliamentary Advisory Group of the Campaign for a UN Parliamentary Assembly. We thought that this would be a good occasion to talk to her about that proposal.

This interview is a slight departure from our usual format. I put the questions in English, Deputy Michetti answers in Spanish and Fernando Iglesias is on hand on to translate to English. Thanks, Fernando!

Deputy Michetti, can you tell us a bit about how you first came across the idea of global democracy and the proposal for a UN Parliamentary Assembly?

I will speak in Spanish and Fernando will translate, ok?

My first consideration on the question of global governance is that it is impossible for it to exist without some kind of mechanism of representation for all the citizens of the world. National states have been overcome by a number of global processes and they are far away from being able to keep up with the pace of the evolution of global society. So the question is how to manage this kind of trouble if national states are not able to manage and/or face the new challenges of globalization in the present world. One of the more troubling problems is the problem of the increase of inequalities in the global world in which almost all of the wealth of the world is in the hands of the richest 12% and almost 60% of the global population is living on under 4 dollars a day of income.

Among the many other problems we have to face: there is the trafficing of people, arms and drugs and this is another example of the kind of global trouble that national states are not able to face. The same could be said of the international organizations in which the concentration of power is even more worrying. For instance in the G8 - with no democratic mechanism - most of the important crises of the world are being managed by the most powerful states in the world. That is why I do agree on the need of promoting some kind of world parliament among the global population in order to give democratic representation to the citizens of the world and include not just nation-states but also organizations like cities that are closer to citizens. These have to be represented at the global level.

To take a very concrete and personal example of how our current international institutions function: Argentina experienced a tough economic crisis which finally escalated in 2002. What was the role of the International Monetary Fund in this?

The enormous crisis that Argentina suffered in 2001 – 2002 was in part a responsibility of national politics. However, it was also the result of negative policies developed by international institutions like the International Monetary Fund.  So, at the end of the '90's Argentina was facing a problem with the value of its currency which was too high. We should remember that during 2006 a document from December 2001 was declassified and it covered a dialogue between the director of the IMF and the Argentine minister of Finance, Mr. Carvallo and Carvallo was asking for help. He needed about 8 Billion dollars for Argentina but the conditions that the IMF put on the table was for Argentina to “dollarise” their economy - making the US dollar the currency of the economy - when Caravallo was asking for some kind of basket so as not to have too much pressure on competetiveness. The answer of the IMF was “No” to the basket of currencies and the crisis developed further in the weeks that followed.

During the 90's the role of the IMF in keeping the convertibility, meaning the basic rule of the Argentine economy the rate of exchange between the dollar and Argentine peso, was 1 – 1 and this was the central cause of the crisis and at the end, when the outcomes of this policy where evident in December of 2001, the functionaries of the IMF without consulting with the central committee decided not to release a part of the credit already designated for the Argentine economy, about 1.2 billion dollars, and this was the real beginning of the crisis with dramatic consequences for our country.

So would it be accurate to say that, to some degree, the crisis was precipitated by how the international institutions behaved?

So, I think that the chaos of the crisis was caused by national policy on the economy while the same time the attitude and policies promoted by the IMF made the crisis deeper and precipitated the final resolution at the end of 2009.

How do you think something like a UN Parliamentary Assembly might make a difference in that kind of situation specifically and generally in terms of global economic and financial governance going forward?

The current institutional framework is showing right now that it is insufficient to cope with the challenges of the modern global economy and we can see similar episodes occurring almost every week! That is why we need some kind of world parliament in order to give a voice to the citizens and also to the small political organizations in cities and provinces. If we are able to develop some kind of world parliament we can develop a global approach to global crisis and provide new solutions with more efficacy because these solutions and interventions would be not just representative of the few or the most powerful but made on behalf and in defense of the interests of the smaller and the less powerful.

Do you see any kind of parallel between what's happening in the Euro zone now and what happened in Argentina in 2001?

Well, one of the similarities between these two crises is the split between the "real" economy and the financial economy and this is very similar. This is all about this division we have developed in recent years between the real production of goods and their distribution on one hand and some kind of "fake" economy on the other that is not representative of real production or goods. And this is not just a problem of the Argentinian economy but for the world. This obsession of some human beings for irrational personal enrichment. On the other hand also the collusion between the economic powers and the political governments have led to these kinds of crisis because of the high number of the links between the political and economic power.

Finally, to take that theme a little further, we have this divide between the real and the fake economy but there is also a divide between global north and south. Since you Deputy Michetti, are representative of the Global South, I thought it might be interesting to hear your views on that divide: does it exist, is it real, what are it's causes? What can we do about it?

There is an amazing quantity of different and valid approaches on the question of the North-South division. One of the approaches is the anti-colonialist approach which supports the idea of the domination of the Southern countries by the north. That the problems of the South are a result of this domination. Another approach suggest the retardation of the South is due to local cultural tendencies which some sociologists have put on the table. They suggest that the problems of the South are intrinsic to the culture. There been extensive reflections on the difference between Catholic and Protestant ethics. So the approach are very different in my opinion all of these approaches and visions of the problems of the South are contributing factors. But in my opinion the most important thing beyond looking to the past and the culture, the real center of our attention should be to look to the future and have a strategy to avoid these kinds of inequalities in the future.

So that is why all those who think and dream for a better world. A more equitable and peaceful world, which includes all human beings. We should think about alternatives to the current governance or rather lack of governance. In this situation in which the project of the UN Parliamentary Assembly will be a good strategy to correct this imbalance and lack of global governance.

Deputy Michetti, thank you so much for taking our call. Was there anything else you wanted to say today?

Just to say, thanks to you Brian for this interview. It's an honor for me to be part of the UNPA-Campaign and I'm going to do my best in order to keep this campaign on track for the future.

Great, I look forward to seeing how that develops Deputy Michetti.