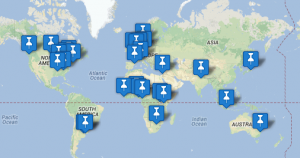 To date, activities are being prepared in 30 locations

Groups and activists around the world are preparing for a Global Week of Action for a World Parliament that will be held for the first time this year from 17 to 24 October. The announcement of the week that was worked out in the last months declares:

If you feel that our current political system is inadequate to deal with growing global challenges, you are not alone! Join our week of action on October 17-24 to call for the establishment of a World Parliament that will give real representation to all citizens.

The idea is to make the proposal of a world parliament known through a coordinated global effort. Recently, a provisional website, a Facebook page, and a Twitter account was created to build momentum and to organize the week's supporters. To date, a bit more than 70 days before the week's launch, events and activities are already being prepared in 30 locations on all the world's continents.

The announcement suggests among other things that during 17-24 October, groups should gather in the public space, for example at important landmarks, and hold up a banner with the week's slogan "World Parliament Now!" Pictures of these gatherings will then be posted on the website, Facebook, and elsewhere. In order to generate public attention, supporters of the week will also organize all sorts of other events including discussion meetings or "model parliaments."

The week's organizers argue that...

A world parliament would be an instrument to find and implement solutions that are democratic, accountable and serve the best interest of humanity. It would reflect the social, political, religious, ethnical, and cultural variety of all the world’s citizens, transcending national boundaries.

If you are interested to participate in the week and to organize some activity or event, have a look at the website and write to the week's coordination team at team@worldparliamentnow.org.

The Global Week of Action for a World Parliament is supported by the Campaign for a United Nations Parliamentary Assembly. The 5th international meeting of the campaign that will take place in the European Parliament in Brussels from 16-17 October 2013 is one of the kick-off events.