﻿ Documentary on world referendum now on the web

Documentary on world referendum now on the web 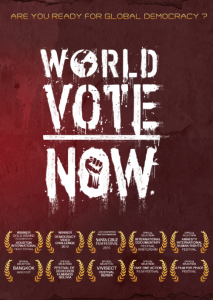 Are you ready for global democracy?

The documentary film "World Vote Now" that premiered three years ago and runs over 77 minutes was now released in full length at vimeopro.com.

The movie that was shot from 2001 to 2009 in 26 countries explores the possibility of a world referendum and features interviews with people from all walks of life. What do ordinary people around the world think about global votes? What about the idea of giving every person an equal say? These are some of the questions that filmmaker Joel Marsden pursued.

"The fundamental and simple idea behind the film is that if democracy is such a beneficial way to improve the governance and development of so many countries and their people, why not try it at the global level as well? When we made World Vote Now nobody could have predicted that there would be democratic revolutions and mass uprisings from Egypt to Wall Street, from Spain to Russia. People everywhere want change! The time has never been more ripe for a global democracy than now," Joel Marsden told us on the occasion of the movie's internet release. 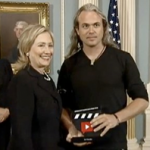 Filmmaker Joel Marsden with U.S. Secretary of State in 2010

Together with MEP Graham Watson and the Club of Rome-EU Chapter, we hosted a presentation of the movie in the European Parliament in Brussels (here's a  report). In 2010, the film won the Democracy Video Challenge, sponsored by the U.S. State Department. It's great that it can now be watched on-line. The documentary appeals to emotions and is wonderfully suited to popularize the idea of global democracy.

Watch the movie here:
In English or in Spanish.