﻿ Talks with parliamentarians in Malaysia

Talks with parliamentarians in Malaysia 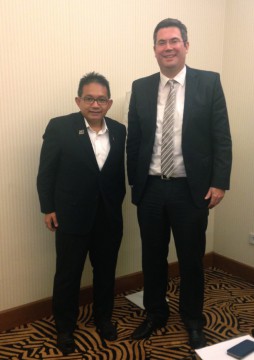 Several Parliamentarians in Malaysia have already signed the appeal for a United Nations Parliamentary Assembly. This was a good basis for the UNPA campaign's representative Rasmus Tenbergen to initiate talks with supporters from the government party and the opposition during his visit to Kuala Lumpur last December.

Member of Parliament Irmohizam Ibrahim, chairman of the Fisheries Development Authority of Malaysia, and a member of the ruling party UMNO's Supreme Council and strategic director to the president of UNMO invited Rasmus Tenbergen to the Putra World Trade Center in Kuala Lumpur and spoke about the importance of participatory democracy in South East Asia and on a global scale. He saw a logical connection between these beliefs and his support for the UNPA Campaign. Furthermore, he made sure that an official letter from the campaign's global coordinator Andreas Bummel to the foreign minister of Malaysia was well received.

In the Headquarter of the Democratic Action Party, one of the most important opposition parties in Malaysia with a social-democratic philosophy, Member of Parliament Liew Chin Tong expressed his support for the UNPA campaign, referring to the third and fourth wave of democratization. He also developed plans to strengthen the UNPA idea within the networks of the Socialist International in South East Asia and globally.

The talks in Malaysia can be seen as a small, but important, step to broaden the support for the UNPA campaign in different countries and regions. Countries like Malaysia could be avant-garde nations and be crucial for the success of the campaign.